Making sense of the Ugandan elections 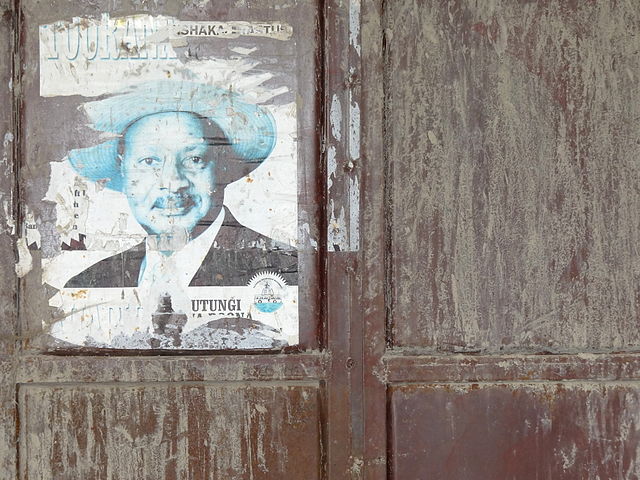 Set for the 18th of February, the presidential, as well as parliamentary and local council elections in Uganda draw near and the candidates enter their final days of campaigning. In his 30th year in power, the incumbent Yoweri Museveni strives to be re-elected for another term in office. Despite the fact that there is little hope in a victory of the opposition, emotions are running high and the campaign rallies have been attracting huge crowds throughout Uganda. Below are the reasons why Ugandan people are paying attention to these elections and why they matter.

Ostensibly, the upcoming elections do not seem to differ much from previous ones. A Research World International survey predicts that 51% would vote for Museveni while Besigye would gather 32% and Mbabazi 12% of the votes[1]. At worst, Museveni could be forced into a second voting round, but he will very likely govern Uganda for another term.

Not only will the results of the elections reflect previous ones, but Museveni’s strategy to ensure his victory also follows the same patterns. Intimidation of the opposition, high levels of corruption, patronage and the creation of new constituencies in highly competitive areas are not new to Uganda. After the 2011 elections, the EU Election Observation Mission concluded “the power of incumbency was exercised to such an extent as to compromise severely the level playing field between the competing candidates and political parties”.

Anticipating corruption and vote-rigging, the opposition, though optimistic it has sufficient support among the population, has little hope in a victory. However, there are reasons why the elections might not be as meaningless as they look.

Increasing fragmentation of the NRM

Apart from smaller controversies, Museveni’s position in the NRM remained uncontested for a long time with his decisions largely rubber-stamped by NRM MPs, the majority in Parliament. For several years now, however, divisions within the ruling party have been increasing. The first NRM primaries in 2010 allowing party members to elect candidates, led to chaos as the elections were widely seen as fraudulent and rigged. Frustrated losers thereupon threatened to withdraw their support to Museveni. Another important dissent within the ruling party emerged in relation to to the discovery of oil in Western Uganda when MPs from the NRM challenged Museveni over oil money and corruption and blocked further oil deals in 2011.

From the seven candidates that are competing against Museveni in the upcoming elections, Kizza Besigye, candidate for the Forum for Democratic Change (FDC) and Amama Mbabazi are the main opponents. While the former has been unsuccessfully running against Museveni since the 2001 elections, Museveni faces in the upcoming elections with Mbabazi a contestant emerging from his own party the National Resistance Movement (NRM). As a potential contender for president, Mbabazi was sacked as Prime Minister in 2014. After early aspirations to compete with Museveni for presidential nominations in the NRM, he declared in July 2015 to run as an independent candidate.

The rival candidacy of Mbabazi and the high number of ex-NRM candidates – now nominated as independent candidates and standing against official NRM flag-bearers in the parliamentary and local council elections – underlines the growing division within the NRM. Most of the 1102 out of 2124 candidates who are running for a mandate as Independents, are former party members who have lost the heavily contested NRM primaries and protested against their irregularities.

The increasing fragmentation of the NRM and the proliferation of independent candidates should make it increasingly difficult for Museveni to govern the country. Already in the last legislature, Michaela Collord describes it as an “unusually rebellious legislature”, Museveni had to make an effort to content MPs who have increasingly expected favours from the executive to approve laws and help to manage their debts. Both diminish his ability to exert control.

The paradox is, however, that Museveni retains control also about a bulk of independent MPs. The current President, who had introduced a multi-party system only in 2005, could be returning to the way of governing under the ‘movement system’ of the early NRM when political parties were not allowed and MPs were operating without party structures.

The elections as a generational confrontation

Uganda has one of the youngest populations in the world: 69.63% are under the age of 24, almost and 80% are younger than thirty. This demographic situation puts new constraints on Uganda’s economy with labour markets not strong enough to absorb the vast number of job seekers. Youth unemployment makes up 83% of the total unemployed population in Uganda. While in 2013 the general unemployment rate in Uganda was 3.75 %, youth unemployment was over 6%. Even with best degrees and university education, young people hardly find a job.

In addition, many young Ugandans believe that their country actually has sufficient resources and that the main problem lies in an unfairly distribution and widespread corruption. Combined with the job-gap, this perception further fuels grievances.

That dissatisfaction with the government and a quest for change are mainly located within the younger population is also based on the fact that the youth has neither experienced any other leader than the incumbent nor is linking Museveni with political and economic improvements. The 1986 generation, in contrast, still credits Museveni with his reforms in earlier years and the resulting economic upswing.

Given the growing politicisation of the Ugandan youth, the various candidates have been targeting them specifically and with apparent success: young people are actively involved in campaign rallies and, on social media, young people are widely discussing the elections. Echoing youth’s discontent, the opposition made “Change” their slogan for the electoral campaign. Most notably, Besigye is promising a transformation and democratisation of Uganda.

Use of social media, increased political participation and the contesting of a long serving President echo what happened in Senegal and Burkina Faso. In these two countries, politics became a generational confrontation between old and autocratic presidents and the democratic aspirations of youngpeople.

However, it remains questionable to which extent the politicisation of the youth in Uganda will lead to a further democratisation of the regime. Although currently mobilised, there is little confidence of the youth in the electoral process and the motivation to change the ruling system is displaced by the feeling that the “election remains just a formality and will not make any change for the betterment of the vulnerable citizens” (reports the founder of an NGO in Northern Uganda).

In addition, the current high involvement in politics and campaigning is also based on individual purposes. A Ugandan journalist explains “the reason is quite simple. Politics is the biggest employer in a country where the majority are young”. Accordingly, Angelo Izama reports “politics offers one of the few avenues in Uganda for economic opportunity”.

In both cases, a highly mobilised youth comprises certain risks: if their grievances are not addressed, the youth might no longer see politics as a medium to seek change. As a consequence, this high politicisation could turn into violence. A social worker from Kitgum points out to the “the possibility of serious violence […] if what they expect is not met”.

Putting stability at stake: the dangerous game with fears of (post-)electoral violence

Museveni’s takeover in 1986 was an important turning point. After a troubled past, economic growth and relative peace were gradually established in Uganda.

Nevertheless, elections have remained occasions that are accompanied by violent confrontations mainly during campaigns but sporadically also in the post-electoral periods. This pattern does not seem to change: the current electoral process has been accompanied by the intimidation of journalists, particularly in rural areas, the use of excessive force by the police to disrupt peaceful opposition rallies and arbitrary arrests. Moreover, there have been assaults carried out by the communal volunteer policing forces called “crime preventers”.

Afraid of renewed economic decline and instability, voters might decide to support Museveni who seems to be increasingly exploiting such sentiments to maintain power. The creation of the ‘crime preventers’ and reports, claiming that NRM members exaggerate their numbers, fall under this appraisal.

Yet, by increasing the tension and the fear of a violent quarrel, Museveni (and the opposition) are playing a dangerous game. In a country, where actually relative security is given, stability suddenly seems to be at stake. In this tense atmosphere, incidents such as the disappearance of the head of Mbabazi’ security team could trigger violence.

Interesting is going to be how the opposition, mainly Besigye and his supporters, will react to a defeat. In contrast to 2001 and 2006 elections, when he tried to challenge the results in the Supreme Court[2], he might repeat his reaction from the last elections and might take protests to the streets. Besigye has indicated that “This time we will not allow them to steal our votes. They think they will rig elections and Besigye goes to court but I will not allow”.

Time-consuming politics at home: how do regional responsibilities fit in?

Under Museveni, Uganda developed as an important regional power and as a close ally of the West. In addition to supporting peacekeeping missions including AMISOM in Somalia, Uganda has been deploying troops in neighbouring countries such as in South Sudan and the Central African Republic. Museveni also enjoys negotiating power in the region: in 2015, he has been appointed mediator in the Burundian conflict by the East African Community (EAC).

But internal politics could narrow Uganda’s regional influence since insecurity and possible violent confrontations would interfere with Uganda’s regional responsibilities. Even now, Museveni is not able to meet his obligations as mediator in the Burundian crisis due to electoral campaigning at home and this is a cause of frustration within the EAC, the African Union and with the USA.

Although Museveni’s victory is not at risk, the elections as well as current political developments are not meaningless. They show the deepening of the growing generational gap between the young generation seeking change and mainly elderly people who see Museveni as a guarantor of peace. Moreover, it is highly important to address the grievances of the youth to secure long-term stability in the country.

Much will therefore depend on the extent to which future governments will find solutions to the  main concerns of the youth and to which Museveni will be willing to hand over power. In 2021 Museveni will be 75 years old. He would have to change the Constitution again to be able to run for another term.

[1] There might be a considerable distortion of the poll results due to a lack of adjusting for regional variation in voter turnout, differences between rural and urban constituencies as well as bribery and intimidation which could lead to unreliable results

[2] Although confirming irregularities, the Supreme Court saw them as not sufficient to alter the results of the elections.