Not Dazzling, But Not Invisible The Ugandan Middle Classes as “Somewhere in Between” 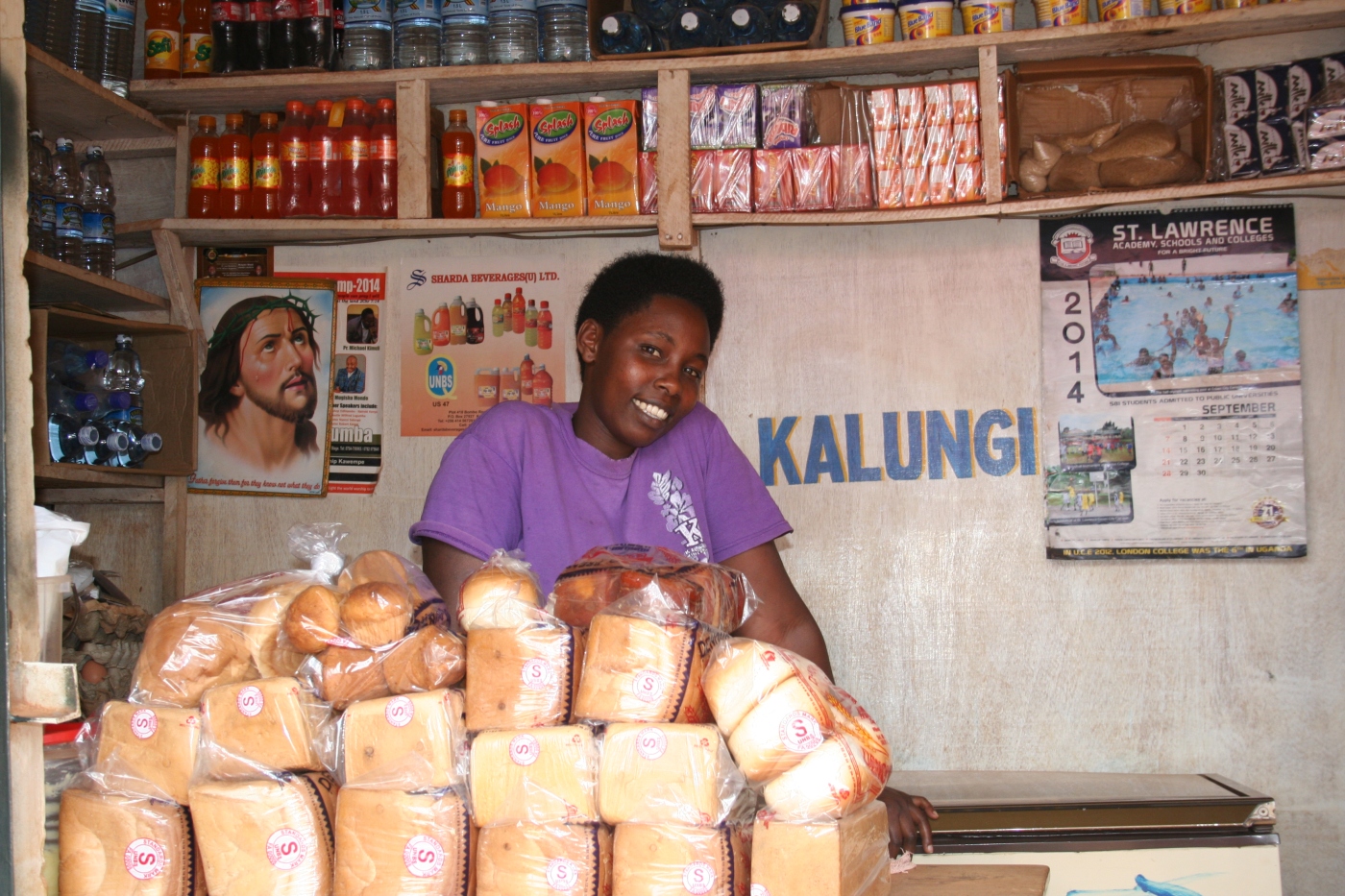 In January 2016, the Kenyan supermarket chain Uchumi has filed bankruptcy for its Ugandan subsidiaries, due to perpetual losses. And they are not alone: companies like Nestlé, Coca Cola or Barclays are slowly pulling out of Africa and recent reports – such as the Global Wealth Databook from Credit Suisse or from the Pew Research Center – suggest that the size of the African middle class may be much smaller than previously thought[1]. So was the hype in recent years about “Africa rising” (Mahajan, 2009) and the African middle class just a bubble? In order to better comprehend the social and economic transformations taking place on the continent, it can prove helpful to look beyond the dazzling facade of economies such as Kenya or South Africa, and into those countries experiencing steady growth, but nevertheless far from including a well established middle class. Their middle classes are not shopping in big malls, driving cars and going on holidays. Rather, these groups are characterized by the improvement of their livelihoods compared to their parents’ generation, in terms of education, income and housing, but they still feel strongly vulnerable, and do not take their new benefits for granted. This has an important effect on their consumption patterns, and may not turn them into the promising new consumers, as they have sometimes been praised to be.[2]

Analyzing consumption patterns is one of the important steps to decipher what constitutes Uganda’s emerging middle classes. Where do they shop? How do they prioritize their budgets? Are they engaging in conspicuous consumption, portraying their newly gained wealth, or are they still preoccupied to cover basic needs?

Here, the focus of the analysis shall lie on their choice for food expenditure, one of the most basic necessities, as well as a marker of wealth: with increasing budgets, the percentage of money spent on food will decrease. Nationwide the expenditure for food represents nearly half of the household budget; in Kampala this figure is significantly lower, with 34% of the budget dedicated to food expenditure (Uganda Bureau of Statistics, 2014). At an average income of 3.6 million UGX per month (corresponding to approximately 950€), the average expenditure on food of 330,000 UGX (90€) represents only 9% of the budget for the respondents in the 2014 interviews. Interviewees in the 2014 survey were asked to detail their expanses. It became evident that most respondents spent a similar amount on food, regardless of the total household income. 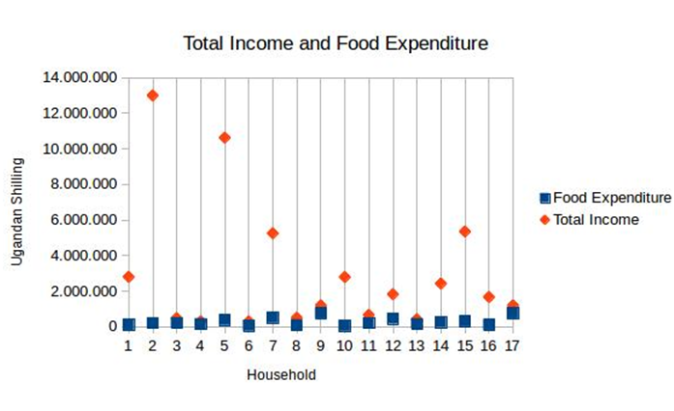 The table above illustrates this: on the horizontal axis, each number represents one household of the sample. The blue squares describe the households’ expenditure on food, varying roughly around 300, 000 UGX, while total incomes – represented by the red diamonds – differ greatly from one household to another. It becomes obvious that whereas the households of the “floating” and lower middle class spend a substantial share on food, those of the upper middle class (here households 1, 2, 5, 7, 15, and 16) use only a fraction of their income – showing that a surplus in money is not necessarily invested in food consumption.

One reason might be that food is still perceived to be the biggest financial burden for the majority of the Ugandan middle classes. Therefore, conscious choices are made to cut down on food expenditure in order to alleviate budget strains and to be able to invest the surplus somewhere else. Similarly, personal trajectories of the emerging middle classes play a role. Not only the upbringing from a humble background, but also the exposure to new lifestyles, affect their food expenditure decisions. Hence, the Ugandan middle classes do not spend more on food simply because they earn more. The reasons given by the interviewees can be summarized as such:

a) Nutrition habits only change slowly

When asked about their diet, most interviewees responded to rely mainly on local food, such as rice, maize, plantains, beans, cabbage, or tomatoes. Even though imported food like pizza, cheese or ice cream can be bought in the big supermarkets they do not constitute an essential part of the daily menu. For those of the lower end of the middle classes they are simply still too expensive. But even for the upper middle class such items are rather “special treats” and are consumed rarely. Sophie Chevalier points out that even though eating is a way to express lifestyle, it is also part of more persistent identities, usually formed in early stages in life and “this changes more slowly than our willingness to experiment with fast foods imported from around the globe.” (Chevalier 2015, p.119) Eating imported food becomes hence a form of conspicuous consumption for the Ugandan upper middle classes – a deliberate choice made because one can afford it; but remains far from being integrated into the regular menu. Local markets are therefore the main food shopping places for all the respondents. Small supermarkets (not the big chains, but those owned by individuals, often Indians) are used to supplement the basics bought on the market by everyday items like sugar, bread or margarine. Big supermarkets, like Shoprite or Nakumatt are mostly avoided. The main reason is that they are considered too expensive, even by those who have a sufficient income to shop there. Simply by knowing that cheaper alternatives exist nearby, it seems unwise to “waste” money in such a place. The surplus is rather saved and invested somewhere else. Those of the middle classes who do shop there belong to the upper end and would do so out of convenience: because all the products needed can be found in one place, and parking is available.

b) “Health consciousness” among the higher income range

The Uganda National Household Survey establishes a correlation: the number of meals taken per day goes up in accordance with the rise in income (Uganda Bureau of Statistics, 2014). But the relation may not be as straightforward, since many respondents of all income classes declared to have only one meal per day. Money can be an explanation, but this can also be attributed to a lack of time due to a stressful working day or for health reasons, such as the desire to control weight or blood pressure. Since the Ugandan diet mainly consists of carbohydrates and alternatives such as green vegetables and salads are not easily available (i.e. they require more financial input) and are not part of early-established nutrition habits, the “healthy” choice seems to consist of skipping an unhealthy meal instead of replacing it by a healthy one. Similarly, because meat has gained a reputation of being unhealthy, many interviewees, especially those below the age of 40, eat it only rarely, in general once a week. Again, this cannot be used as a direct indicator of wealth, as meat consumption is not linear with income. With rising income and education, awareness of the risk of unhealthy eating rises as well. Besides, among the younger members of the middle classes, other lifestyle choices have to be taken into account: for example the redefinition of beauty norms, corresponding with an accrued interest in weight loss.

Health consciousness is also one of the reasons for relying on local food, as imported products often have the reputation of being unhealthy. Among the more educated strata, distrust towards imported food exists: genetic modification represents a major source of concern, whereas local food is generally perceived to be organic.[3]

The Ugandan Middle Classes: A Call for a More Nuanced View

These interpretations explain why the Ugandan middle classes are not the supermarket shoppers that are often evoked when talking about the so-called middle class. Even though more money might be available, household budgets are still tight. And because they still consider themselves struggling, they will deploy various techniques to keep their food expenditure as low as possible.

Instead of food, most of the surplus income is invested into education: contrary to the perception of most respondents, education constitutes the biggest share of the household budget of the Ugandan middle classes. Here the figures are nearly reverse to the expenditure on food: whereas the average Ugandan household spends only 7.5% on education (Uganda Bureau of Statistics, 2014, p.82), the average emerging Ugandan household will allocate nearly 20% to education. The importance of education, in order to receive a higher income, has become conventional wisdom. The middle classes are putting a lot of effort into securing good education: either trough continuing their own education, achieving higher diplomas – a Master’s degree, or other postgraduate degrees – or through investing in their children’s education. This becomes visible in their preference for private instead of public schools, even though they are more expensive. Also, when asked, most respondents name education as their first priority for their children. However, especially in tertiary education, school fees are rising while the possibilities to obtain government scholarships are declining. This is a major challenge. Therefore education will most likely remain a preoccupation for the middle classes.

Although food consumption does not significantly change with rising income, the Ugandan middle classes already mark a shift in norms, compared to previous generations. Diabetes, cardiovascular diseases and genetically modified food (among others) have become some of the new preoccupations unknown to older generations. This places the Ugandan middle classes somewhere “in between”. They are on the cusp between their humble backgrounds that will contribute to the consumption choices they make, and the possibility to afford new lifestyles. They also find themselves between the vulnerability of falling back into poverty and new opportunities and aspirations that have come with the rising disposable income. The middle classes are a real category because they mark a difference with previous generations as well as with other income groups. But we need to have a much closer look, beyond simple macroeconomic statistics, to really understand what actually characterizes them.

McKinsey Global Institute, “Lions on the Move: The Progress and Potential of African Economies”, 2010.

[3]. This interpretation may not correspond to the actual state of organic food production in Uganda, but in the minds of the respondents a direct link between “local” and “organic” seems to be established.